What is the future for hospices? They can be sarcastically described as offering “de luxe dying for the few looked after by dowager duchesses,” but they undoubtedly provide services that the dying and their families greatly appreciate. But only a minority of people die in hospices.

I’ve collected here three pieces on hospices that stick in my mind. One is my rather long and dull account of visiting my local hospice: it explains the mechanics and finances of a hospice.

A short, provocative piece by Colin Douglas (actually Colin Currie), a geriatrician, critical of hospices is below. (I fear that it may not be easy to read, so below the picture is a link to the BMJ article, which can be accessed only by those with a subscription. If you can’t read it and can’t access the BMJ email me at richardswsmith@bmj.com I’ll send you a PDF.) 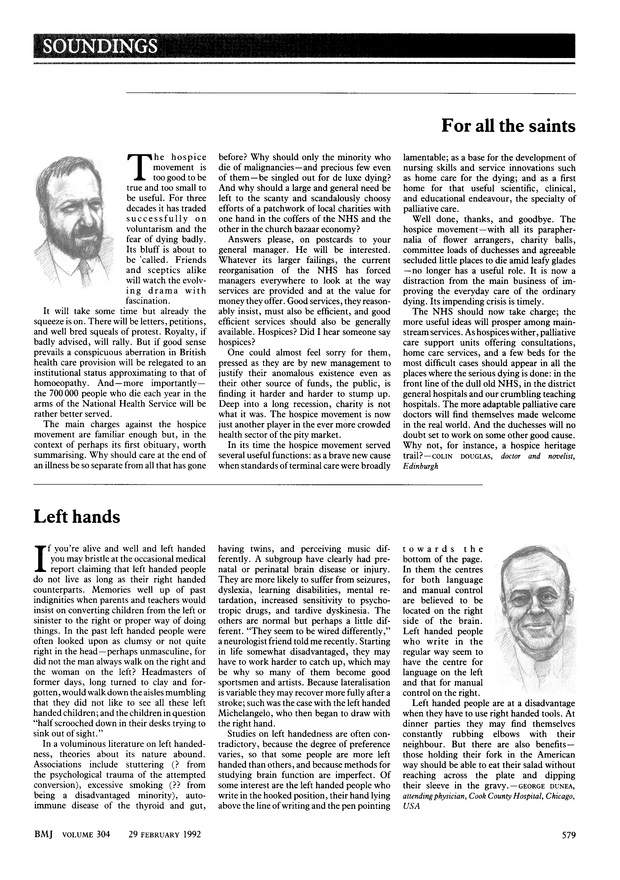 And below Liam Farrell, a GP and writer, describes the startling contrast between hospices and care homes:

Last year, on a hospice locum, I made a point of visiting the day room as often as I could. It was a source of wonder; whenever I looked in it would be humming with activity. In one corner, a sing-song would be in session, with a volunteer accompanying on piano; in another corner, set up as a little coffee shop, there were animated discussions going on at every table. Outside, the minibus, driven by another volunteer, was drawing up, and some residents burst in the door full of news about their guided trip around the Botanic Gardens. It was a place where death was not considered an enemy.

The locum post included home visits, and during one of these I attended a patient in a nursing home for the elderly. After the consultation, on the way out, I passed the day room. It was huge, gloomy, and cavernous. The floor was covered with a grubby stained carpet, and the curtains were partly drawn even though it was a dull cloudy day and dark enough outside. A television was blaring; a children’s cartoon was on. The old people were lined against the wall; some were rambling and whispering to themselves, others were dribbling, most were just staring into space. An old man sitting near the door pawed at me, and I recoiled involuntarily and fled. There was just too much grief, too much misery to cope with; it was a place where death would have been a real friend. As with the Struldbruggs in Gulliver’s Travels, there can be no fear of death when we see the real horrors of eternal life.

I’m not being specifically critical; I’m sure similar scenes are replayed regularly throughout the NHS. But why? Why is there such a gulf in the level of care? Both sets of patients are dying and both are surely equally deserving.

There are, however, some significant differences. The people in one group are younger and are able to communicate their symptoms better, and their care remains largely voluntary; there is no commercial imperative.

But perhaps the crucial difference is that one group has more predictable and shorter prognoses. If a patient with senile dementia is in severe chronic pain, are any of us going to have the time to visit them regularly during the day and follow them up regularly during the following weeks and years? For every patient dying with cancer, a general practitioner will have three or four dying with one of the degenerative diseases of the elderly.

Patients with cancer are different and, dare I say it, easier to look after; it’s like getting on a train a few stops from the station. We know that, however onerous the commitment, it won’t last for ever. So lots of other passengers jump aboard: distant relatives, neighbours, specialist nurses, hospice doctors, social workers, chaplains. And when the train pulls into the station—bang!—we all jump off in a huge blast of endorphins. Do-gooders? As John Wayne said, “We’re doing good for ourselves.”—LIAM FARRELL, general practitioner, Crossmaglen, County Armagh